skip to main | skip to sidebar

ALERT! ALERT! There is trouble on the hill behind my house!

Just look at the strange beast that showed up in the field behind my house today... 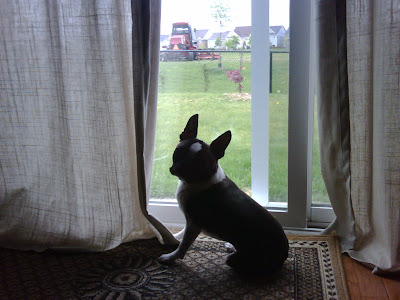 How would you react to such a threat? I huffed and puffed, paced, and raised my fur in a classic mohawk to show that I wasn't messin' around. It took all my strength to restrain myself from bursting out in uncontrollable barks. And you know what? Even after my serious intimidation the darn beast didn't budge! I had to camp out by the window so that I could keep my eye on it.
Posted by Tito at 12:26 PM 4 comments:

Have you heard!?!? Have you heard about Bob the pug from British Columbia who narrowly escaped death by WOLF recently?

I was horrified to read this story. Can you imagine being snatched up for lunch?

Don't worry, there is a happy ending. Bob was saved by his chubby neck...tee hee hee. It seems his healthy diet of steak and cheese provided just enough padding to prevent the giant wolf from wolfing him down. Me thinks it's time lil' Tito packed on a few pounds...there have been coyotes in my area!

Come on pups - let's unite!! And demand a diet of steak and cheese from here on out!

CBC News
Bob the Pug appears a bit sleepy after his encounter with a wolf, which had Bob clenched in its jaws. (Submitted by Courtney Scott)
Residents of a Prince Rupert, B.C., cul-de-sac banded together to save a neighbour's dog, Bob, from the jaws of a wolf.

But it may have been Bob the pug's pudgy waistline that thwarted the attack.

Norm Hebert had heard rumours of brazen wolves prowling around Prince Rupert, but it took him a moment to realize what was going on when one showed up on Alpine Drive, the street where he lives, last Thursday.

At first, Herbert thought another neighbour's larger dog was playing with Bob.

"On second look I realized it was a wolf," he told CBC News.

Aiming to end the attack, Herbert rushed out and whacked the wolf with the first weapon at hand — a Sherwood Featherlight hockey stick.

Despite manufacturer's claims that the stick's carbon fibre shaft allowed for accelerated recoil and energy transfer, the Sherwood failed to have the desired effect on the seasoned predator. The animal merely trotted off with the pug in its jaws.

"He just glared at me … and he picked it up like a mother would pick up her kitten," Herbert recalled.

So Herbert called on his neighbour, Trevor Deschamps, who owns Bob the pug, for help with the rescue.

"He said, 'I think a wolf just ran off with Bob,'" Deschamps said. "All I wanted was to bring him home."

Soon the whole street was involved in the chase, including Deschamps' wife, who gave birth just two weeks before, with her kids in tow.

And eventually, the neighbourhood posse had the wolf cornered against a chain-link fence, with Bob the pug dangling from its jaws.

"Black, brown chest, he was probably a couple of hundred pounds," Deschamps said of the wolf. "We hit him with sticks and rocks and he decided to drop Bob at that time."

Bob had been punctured, but his pride was intact. Mostly.

"Apparently, he was too fat for the wolf to get a good bite into him," Deschamps said.

Perhaps sensing his continued survival on the mean streets of Prince Rupert might be a matter of size rather than strength, Bob has since refused to eat his dry food. Only black forest ham and cheese will do, Deschamps said.

"We were just commenting a week before that maybe we should put Bob on a diet because he's getting kind of fat . … And I think that might have saved his life."

Residents of Prince Rupert have been getting nervous about the number of wolves turning up around town in recent years. In 2008 alone, they reported 136 wolf sightings in the isolated coastal community.

The wolves have been spotted at the golf course, in backyards, even prowling around the civic centre, drawn to the city's population of wild deer, and also small pets.

Read more: http://www.cbc.ca/canada/british-columbia/story/2010/04/01/bc-prince-rupert-wolf-dog-attack.html#ixzz0lIgvvUbZ
Posted by Tito at 4:18 PM No comments:

Have I mentioned my mom learned to knit last year? Well, earlier today I got awoken from a deep nap to try on a new hat. I lifted my chin high so that she could put it on me. 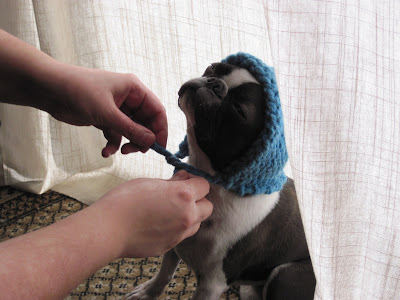 My dad accused my mom of making me suffer an extraordinary humiliation, but I kinda think the blue looks good on me: 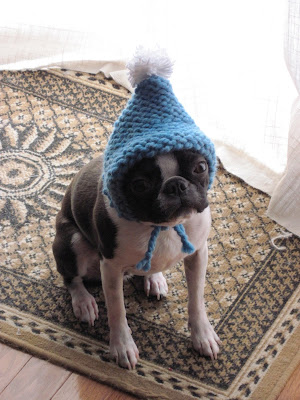 And it keeps my ears warm, too: 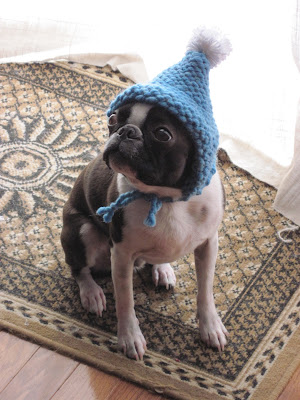 I'm only allowed to wear it when the humans are watching me. I'm not sure if that's because of the chin tie or the fact that I would have that pom pom destroyed in seconds if I was left to my own devices!
Posted by Tito at 4:23 PM 5 comments:

It's my favourite time of the year. The other day, I caught scent of something very tasty in the house. I knew it could mean only one thing.....time for my annual celebratory birthday cupcake! 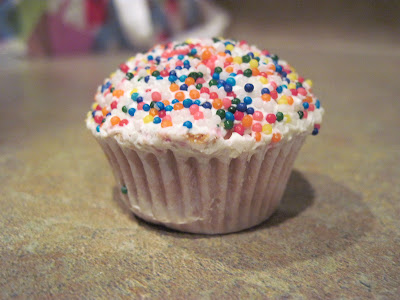 Isn't it a thing of beauty? As soon as I got my first sniff I snapped into a perfect sit/beg pose and batted my eyelashes at the humans. 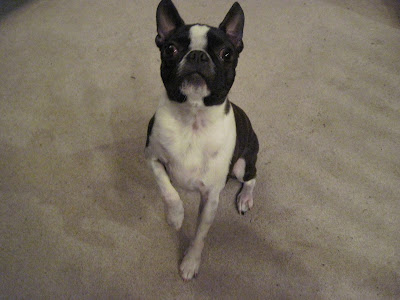 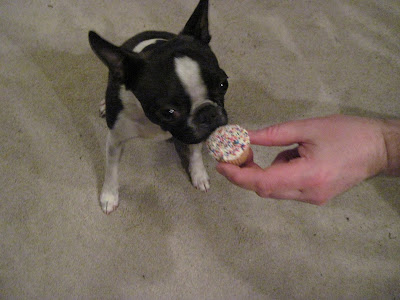 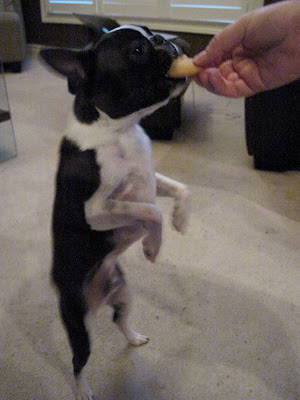 Later in the evening my grandma stopped by with a card AND a gift. Hey - that dog looks a little like me! 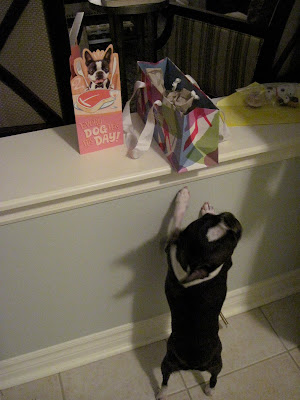 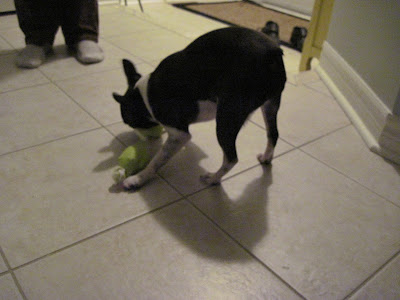 It feels like spring has sprung in my neck of the woods. With the temperature hitting the low teens, you'd hardly guess it was still March! Normally I'm still deep in my winter hibernation at this time of year. Instead, I'm out frolicking, sniffing everything and making new friends this year.

Here is a photo of me doing my best Easter Bunny pose: 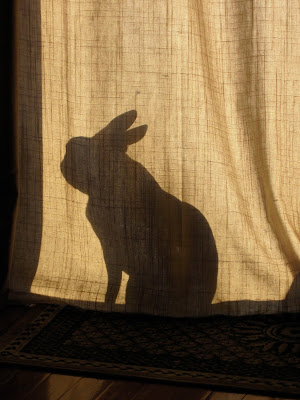 Hope you're enjoying the warm weather as much as I am!
Posted by Tito at 5:21 PM 3 comments: 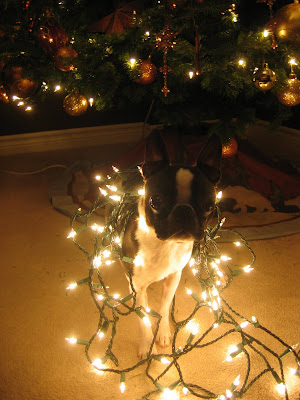 Tito
I am a Boston Terrier. I was born on March 23rd, 2007 in Bains Corner, New Brunswick, but now I live with my new family in Toronto, ON. Have fun reading my blog. I looooove comments!